Explore Your World With
Powered Parachutes!

A powered parachute is a personal aircraft with a propeller-driven cart suspended from a parachute, which acts as the wing. The carts can be either three-wheeled or four-wheeled and the engines vary in power from roughly 40 horsepower up to as much 190 horsepower.

Powered parachutes are mostly recreational machines, offering flight experiences that are hard to duplicate with other types of flying. Slow, low altitude, open cockpit flying is what many people dream about when they have dreams of flight. This is exactly what a powered parachute does!

Powered parachutes fly at about 25–35 mph, although faster speeds have been attained up to a record speed of 49.5 mph. Their slow speeds make them ideal for flying safely close to the ground, although some people fly them over a thousand feet up with the current world record holder having attained an altitude of 18,710 feet mean sea level (MSL).

In the United States, powered parachutes may be flown as either ultralights or as certificated aircraft. Ultralight versions are lighter, carry a maximum of five gallons of fuel, may only be flown during daylight hours, and are single-seat only. The benefit to the ultralight version is that there is no licensing involved. Certificated powered parachutes aren’t limited by the ultralight rules, but pilots need proper training and certification.

The FAA offers two levels of certification for powered parachutes, Sport Pilot and Private Pilot. Both ratings allow a pilot to take a passenger along for the flight. However private pilots are also able to fly powered parachutes at night. Easy Flight is one of the only schools in the United States that can train and certify students for both Sport Pilot and Private Pilot Powered Parachute ratings.

Register for our free on-demand webinar to learn more about how you can become a powered parachute pilot.

Register for the Free Webinar

Powered parachutes are far safer than most other forms of aviation when flown in the proper conditions. Powered parachutes have positive stability, which means that when a pilot releases a steering input, the aircraft seeks to fly straight and upright again. This is obviously better than aircraft which have negative stability, which makes them unsafe to fly. But it is also an improvement over even well-designed airplanes, which only have neutral stability.

A powered parachute’s stability comes from a large displacement of forces. The wing pulling the aircraft into the sky is many feet above the center of gravity of the cart, which pulls towards the ground. It is easy to visualize this stability by thinking of a hot air balloon. The lift in the balloon is (like the parachute wing) always pulling skyward while the basket below the balloon is always pulling towards the ground. In both types of aircraft, pilots don’t have to do anything to keep the aircraft flying upright.

Other safety features found in powered parachutes are:

Other costs include where you want to store your aircraft. If you want to store it at an airport, then there will be hangar fees that amount to a monthly rent. But since powered parachutes aren’t full sized aircraft, they rarely have to pay full-sized hangar fees! For those who fly from their own property, there won’t be any direct costs except for making room for the aircraft in a garage or outbuilding. However, the most common method of storage is a dedicated enclosed trailer. Those can be purchased new for less than $5,000. Trailers are considered superior because pilots can bring their powered parachutes to fly-ins or rallies or even take them on vacation.

Training is another expense. Getting rated in a powered parachute requires meeting requirements set by the FAA. The training, recommendations for ratings, and check rides can vary widely from instructor to instructor and school to school. Things you may want to consider are how far you need to travel for the training, concentrated vs. session-by-session training, and availability of the instructor to train compared to your schedule or circumstance.

Bottom line, powered parachuting remains the least expensive form of flying. Especially if you want to share the experience with someone else!

Powered parachuting is probably best thought of as an adventure motorsport. Despite the sport’s inherent safety, it attracts very adventurous people who want to see the world from a unique point of view.

Most people who have the dream of flight, dream of flying as a bird. They want the same interaction with the planet’s surface that birds enjoy. Helicopters can achieve that form of flight, but not without some risk. Helicopters must maintain a certain velocity in order to autorotate if their engines quit. That velocity allows them to autorotate to the ground without power. However, that forward speed also increases the chances of hitting a hard to see hazard like a powerline, which is often fatal for rotorwing aircraft. While certainly not advisable, powered parachute interactions with powerlines can be very damaging to equipment, but not to pilots or passengers.

Powered parachutes fly at the same altitudes that civilian drones normally fly. However, instead of looking at the world through a tiny screen, pilots get to enjoy the real thing! 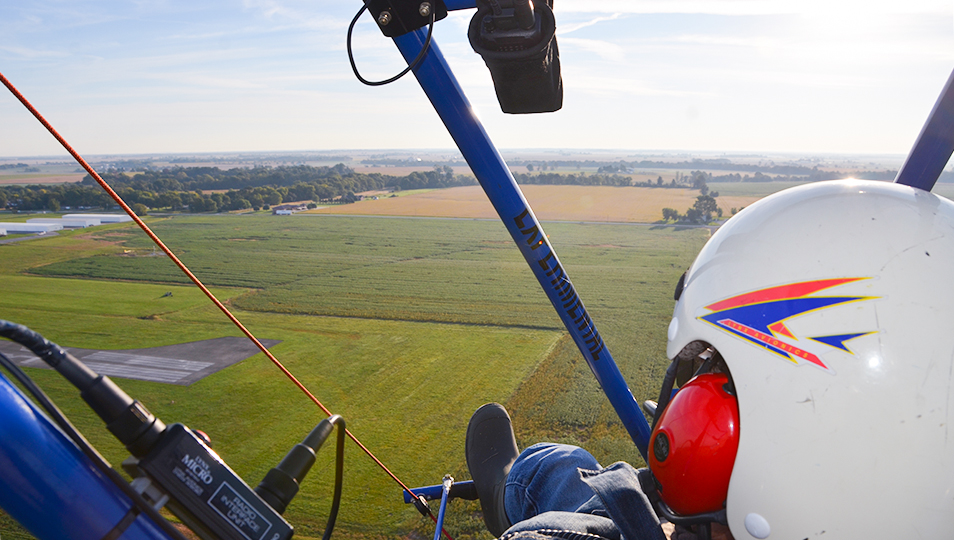 Powered parachutes are able to take off from most civilian airports, but are by no means limited to airports. Actually, most limitations on powered parachute operations have more to do with airspace and congestion on the ground than it does with where someone can take off from.

As far as taking off and landing goes, most states allow that from private property. That means if you have enough cleared land or you have a friend with that kind of land, you have a possible powered parachute airport. Established airports may be either public or private. A public airport normally has to allow powered parachute operations. An exception would be towered airports. In that case you need advanced training in order to know how to communicate with the tower. A private airport doesn’t normally have to allow you to fly, but most seem to be pretty welcoming.

The airspace you are flying in is a big deal. The sky is divided into controlled and uncontrolled airspace and you need to understand which airspace you can enter under what circumstances. That is where proper training pays big benefits by keeping you safe and legal. 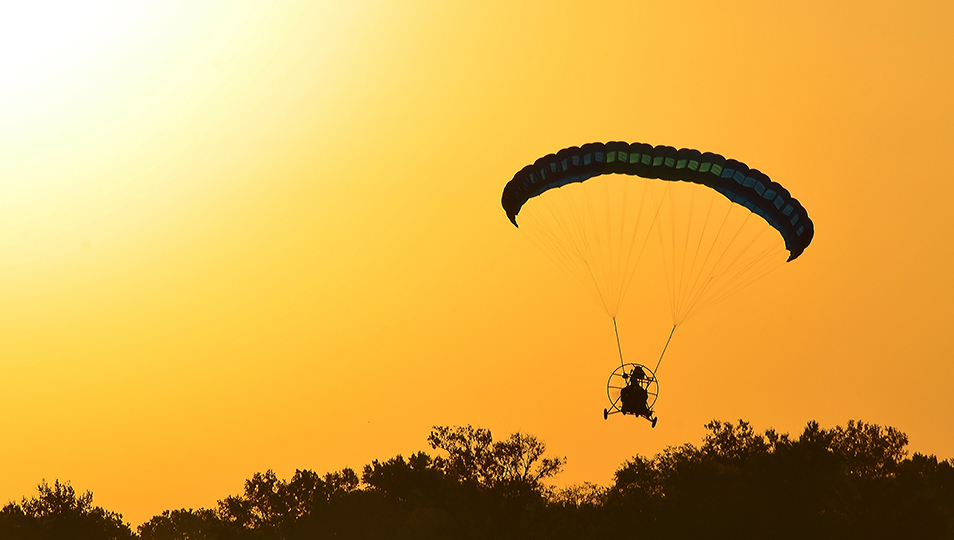 It is quite natural for people to have a lot of questions about powered parachuting since the sport is relatively unknown. We grow up around cars, boats, and motorcycles. That means we don’t normally have big questions about them.

Most people turn to the internet as a source of information for the sport. Of course the internet is a great place to go to learn about things, but a lot of data is often wrong or dated, depending on the web site. There have been some big changes in the sport over the years as far as equipment, rules, and even training practices go. We try to keep up with the state of the art and try to reflect that in our web site. Please feel free to explore the site further. If you have specific questions, we do have a Frequently Asked Question page we hope may help.

Learning to Fly a Powered Parachute 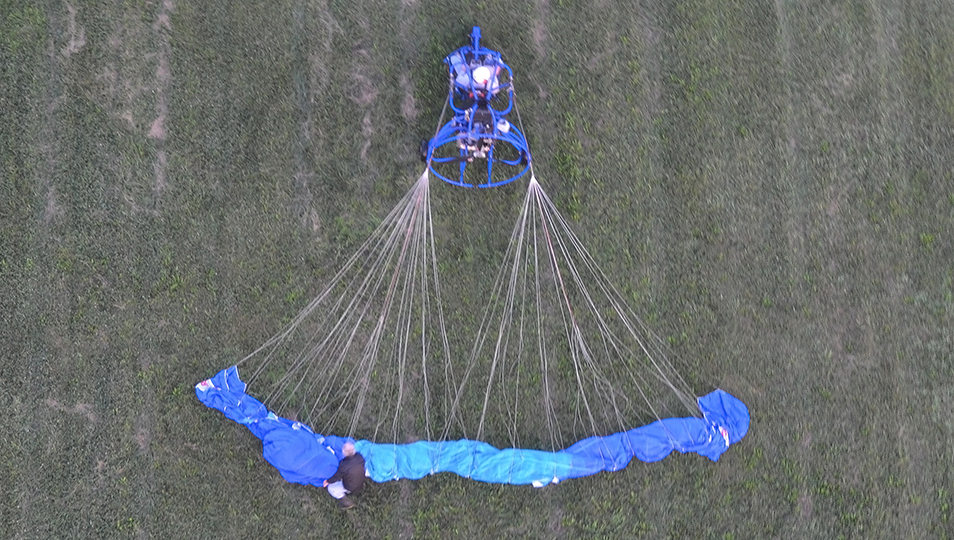 What Kind of Training Do You Need?

Light, single-place powered parachutes are flown as ultralights, which means that there are no FAA-required minimum training standards or requirements for a pilot certificate. Of course you need to still be able to operate the equipment safely and understand the FAA rules that do apply.

If you already have a sport pilot or higher certificate for another type of aircraft, getting an additional sport pilot rating for powered parachutes is easier for you than someone just starting out. 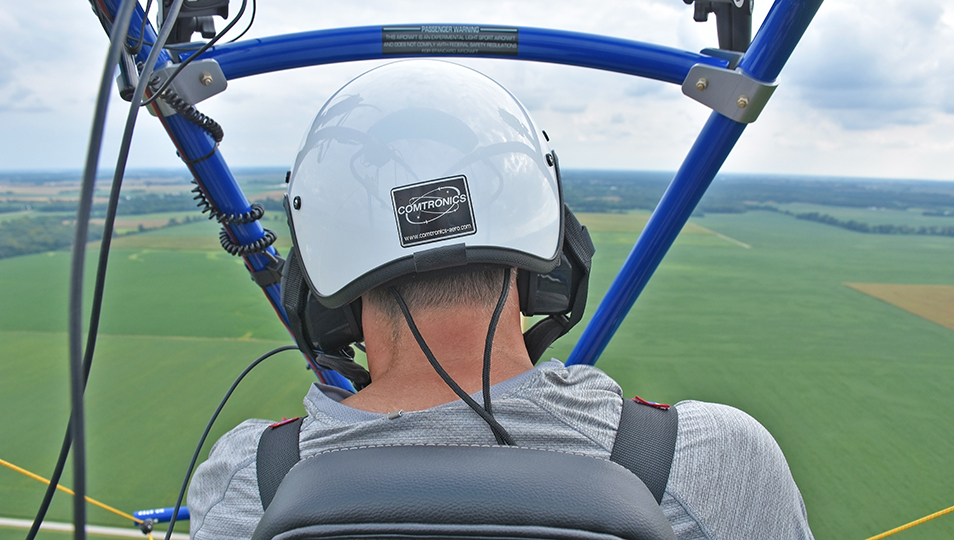 The biggest benefit to becoming a sport pilot is the ability to take friends and family along for the ride. Many of us not only enjoy flight, but want to share the experience with others. Two seat powered parachutes and the sport pilot rules allow that to happen. Of course becoming a Sport Pilot is a lot more rigourous than becoming an ultralight pilot. After all, when you are taking someone with you, the FAA wants to make sure that you meet some kind of qualifications.

If you are just starting out in powered parachutes and you don't have any FAA licenses yet, the whole training and licensing process can seem a little daunting. It doesn't have to be. Flying a powered parachute is one of the easiest skills to pick up while at the same time being very rewarding. But while the skill of flying can be picked up quickly, powered parachutes still share the sky with plenty of other aircraft and their pilots need to know the 'rules of the road'. That is where training and licensing come in. Visit "Becoming a Sport Pilot Powered Parachute" to learn more. 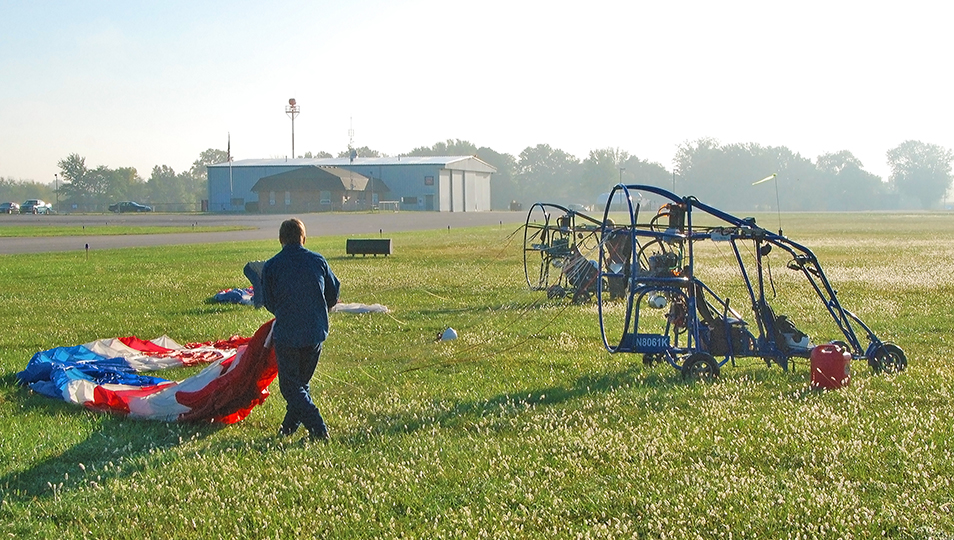 Being a Sport Pilot for powered parachutes satisfies the flying needs of most pilots. After all, the benefits are the abilities to fly better, more capable aircraft and the ability to take someone along for the flight. Private pilot offers some additional advantages, mostly being the ability to fly at night, flying powered parachutes with more than two seats (Yes, they exist!) and being able to fly at higher altitudes. Some people just want to possess one of the most exotic ratings in the FAA inventory!

Whatever your motivation, Easy Flight can help you become a Private Pilot for powered parachutes. The best approach is to earn your Sport Pilot rating first because the total time needed to become a private pilot for powered parachutes is 25 hours, which is quite a lot of flying. Since much of that time can be done solo, it makes sense to earn the Sport Pilot endorsement, go home and fly, and come back to finish up the private pilot certificate.

If you hold a sport pilot, private pilot or higher rating and would like to transition to powered parachutes or just pick up the additional privilege, you're already in very good shape. The FAA recognizes the work you've already done to become a pilot and does not prescribe a specific amount of time for you to train in powered parachutes before you are able to get your sport pilot endorsement. However, they are concerned that you do achieve the same standards that others do. That means some amount of training and testing on the equipment you intend to fly.

If you want to get an additional private pilot rating for powered parachutes, there will be a little more work involved. You will not need to take a knowledge test again, but you will have to get all of the dual training hours (including dual night hours), just like someone seeking their first private pilot rating.

Preparing for Your Check Ride

The check ride is something that everyone has to go through in order to fly a two-seat powered parachute in anything other than a training capacity. However, the term check ride is a little too generic.

If you are already a sport or private pilot for another kind of aircraft, the term is actually called a proficiency check. If you are new to the world of FAA ratings, then what you will be doing is called a practical test.

The good news that preparation for both proficiency checks and practical tests is the same. The differences mostly are in the qualifications of the person performing the test.

Easy Flight can perform both kinds of pilot tests and can also help you prepare whichever one you require. 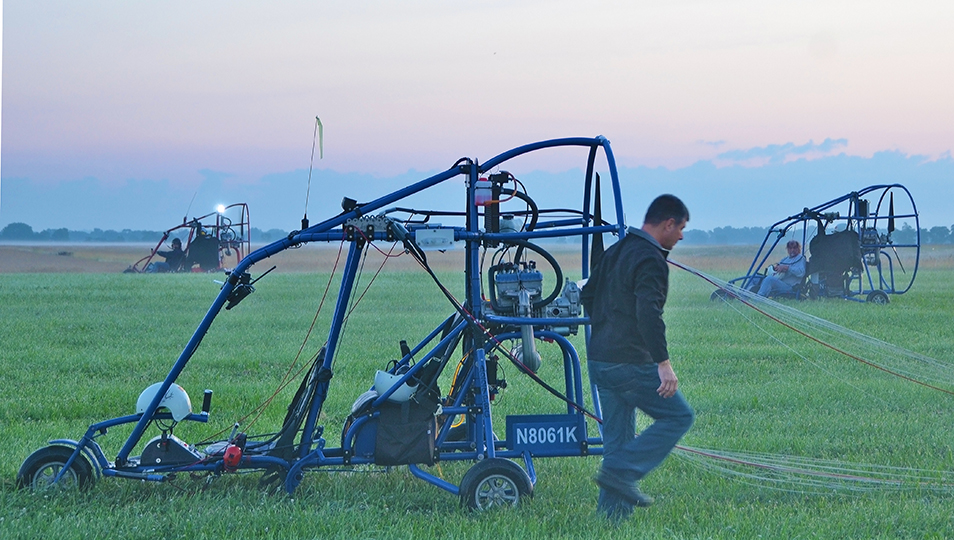 Learn what it takes to fly, get your FAA pilot license, and share the dream of recreational flight with family and friends!

What you are going to learn:

Register for the Free Webinar